Here you will find some information regarding horses that have previously been campaigned by Christine.. These horses may have moved on to new competition homes, greener pastures, or remain as part of our highly successful breeding program. You will find images of these horses in our similarly titled Photo album in our Photo Gallery. 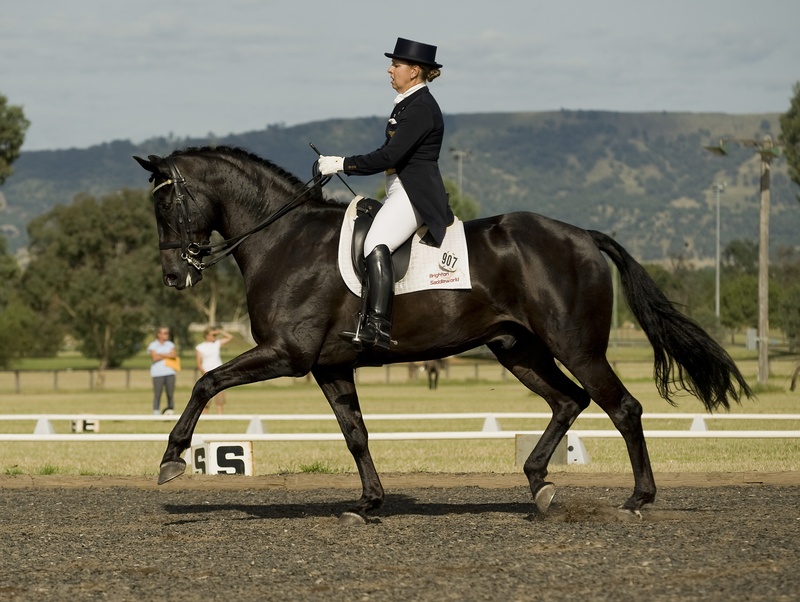 by Regardez Moi out of Beauford Belange. He was an impressive 17.0hh black gelding with a powerful ability to collect. He schooled with Christine and Jeremy through the ranks and was competing successfully at Official small tour FEI level. We were deeply depressed by his passing early in 2010 as a young horse with his future ahead of him.

He was a supremely talented and unique individual who we will miss terribly within our stables. His rider, Christine Crawford and groom, Megan Riley have been robbed of the beauty and character that glowed from the delightful black Regardez Moi gelding. He was easily schooling all Grand Prix movements and was proving himself as a talent with a quick mind and athletic movements.

We are sure to meet again...

Christine Crawford worked with and competed Northern Simba through to FEI - Prix St George level whilst he was campaigned by Christine. Northern Simba is an impressive Falklands Victory stallion owned by Elaine Harrision. Simba has since moved on, spending some time with Matthew Dowsley before heading overseas to Germany .

Some of Northern Simbas' more significant achievements while campaigned by North Kaludah:

We wish Simba success in his new home in Germany and look forward to hearing details about his successful career in the near future.

Simba trained and competed with Hayley Beresford in Germany and we were proud to have been a part of this horses beginnings and to have helped him achieve FEI ranks then head overseas,

Krack A Jack C is an impressive Warmblood gelding. Born in 1999, he stands at 16.3hh and is by the impressive Krack C, ridden by Anky Van Grunsven. Krack A Jack C is owned by Diane Burns. In 2004, Krack C was winning and placing at Grand Prix level (70-79%) and was short listed for the 2004 Olympic Games. Krack A Jack C shows exceptional ability, movement and willingness to learn. He is winning with dressage scores up to 70%. At the KPWN 2003 colt selections he had more sons than any other individual stallion. Both Krack A Jack C’s dam and grand dam are FEI dressage horses. Dorfschoene’s breeding traces back to the legendary Gotthard and Absatz. Dorfschoene’s competition career was remarkable with wins and places at State and National Championships up to FEI level. Dorfschoene has excellent jumping bloodlines, she has a full brother successfully competing in Germany and another full brother D’Artagan is a World Cup showjumping competitor.

We wish Krack A Jack C all the best with his competition career for the future.

Sandrels is a Black imported Oldenburg stallion born in 2001. He stands at 17.1hh. He successfully completed his 30-day licensing, placing third with Ulf Muller on 8.75. He is an elegant type, with an amazing disposition and shows great trainability. He is very athletic with uphill paces and plenty of jump in the canter.

Some of Sandrels more significant achievements while campaigned by Christine:

Sandrels has since returned to his owners at Karingal Equestrian. We wish them all the best for the future.